The history of Seend Parish covers many centuries, and is inexorably linked to its environment. Over centuries some of the activities that helped to forge its identity have ceased but the legacy of their success remains in buildings. House, field and place names also offer evidence of associated activities.

The earliest records from Seend relate to several Neolithic flint tools discovered to the north and south of the village. In addition, two Romano‐ British coins have been uncovered in the garden of Beech House. The village itself has Medieval origins, being first recorded as Sinda in 1190, meaning a ‘sandy place’. To the north of the village, crop marks noted on aerial photographs relate to a probable late Iron Age/Romano‐British settlement site overlain with Medieval ridge and furrow.  Early water supplies were taken from wells located on either side of the High Street (several houses on both sides of the High Street have internal wells). An adequate supply of water would have been important in the decision to locate a settlement on the ridge.

The Parish was mainly a rural, farming community and remains so to a significant extent. In the early 19c many of the houses along the High Street were in fact farmhouses, although few now retain the old names. Dairy farming and beef cattle dominated. Ownership of the land was mostly in the hands of the farmers, although two centuries earlier the Dukes of Somerset owned a lot of land around Seend. In 1954 they sold the last of their holdings in Seend, Egypt Farm, to the Wiltshire family who were tenant farmers. There remain a number of traditional barns, many have been adapted to other uses, but they remain as a continuity of historic character and a link to the agricultural heritage of the Parish. Farmers play an active role in the life of the Parish, and there is usually one or more on the Parish Council.

In the Middle Ages it was wool that brought Seend its wealth and with it our fine church, and some of the larger houses. This trade was made possible by the abundance of water to turn the mills. There were a number of skills associated with the wool trade; fuller, tucker, shearman, clothier and weaver. Weavers’ Cottages is a terrace of homes at the west end of the Conservation Area. Traces of the way people moved across the landscape can still be seen, with a particularly beautiful example being a footbridge on the Parish Boundary with Semington about 75 meters east of Tweenwaters Bridge (see photograph to the right). The footbridge now crosses a dry ditch but  originally crossed the Semington Brook and is dated 1691. This stone bridge is included in Walk 3 within the Booklet of Walks being prepared by Seend Parish Council. Seend is known to have had a tailor from the period 1634 to 1760; the last one owned the house now called the Old Bakery. Prosperity also brought a many other trades to the Parish, as well as ambition and social advancement. Several of the prominent families became professionals or became politically active. Plaques in the church indicate that there are still descendants of some of these families living in the area today.

The ridge on which Seend Village is built is a crop of Lower Greensand and has within it ironstone. Lack of fuel (sufficient wood) to smelt the iron ore, is the reason given why it was not mined before the mid 19c.

With the proximity of the canal and then the railway (built and opened in 1857), it was possible to ship the product away for smelting elsewhere or import the coal to do it on the spot once smelting and blasting furnaces were built.

Walking around the rural Parish of Seend today, it is hard to imagine that 163 years (1856) ago a lease on a piece of land to the north of the Brewery Inn would become a huge industrial site mining iron ore in Seend Cleeve. The mining activity was to last just over 30 years, but details of the frequent changes of ownership indicate that this was a very speculative business and several bankruptcies ensued. Whilst a local blacksmith is recorded to have been using the ore in the 17c, this brief period of large-scale extraction was short lived. The above image of the Iron Works is included with kind permission from the Devizes Museum.

Nevertheless, from the very interesting photograph below, it can be seen that considerable investments were made in building three large furnaces. The site was linked to the Devizes - Holt railway line (opened in 1857), so the smelted pig iron could be transported from the site to its destinations. The canal was adjacent to the works so it also provided a means of transport.

The quarries were abandoned by 1881 and the furnaces were destroyed in 1887. Further unsuccessful mining attempts were made by a succession of owners from 1905 until 1946 when all activity ceased. The only remains of these works above ground can be seen in the field below Ferrum House.

What is the legacy of this brief period of activity in our Parish today?

The abandoned quarries to the north and south sides of Bollands Hill are now SSSI (Site of Special Scientific Interest) designated. The speculators were mainly not local people except for Wadham Locke, the owner of Cleeve House at the time, (built soon after 1857). He worked the mine for only a year, but then leased the land to other speculators, as he then owned it together with the mineral rights.

The original modest home for the works Manager, Ferrum House, was sold and remodelled around 1900 with the addition of turrets and has been further altered since turning the turrets into towers. Oriel House was designed by the same architect as oversaw the remodelling of Ferrum House. All three of these houses have good positions with excellent views. It is possible that their ‘agrandissements’ were made feasible by mining profits.

There was a Methodist Chapel in Factory Row, but a second was built in Seend Cleeve in 1849. This also housed a school and was likely to have been used by the extra families who came to Seend to find work at the Ironworks. It has recently been transformed into a home. Large lumps of slag have been used decoratively in some walls in Seend Cleeve.

The branch railway line, which linked up to the line at Seend Station, (opened in 1857, closed in 1996) has long disappeared, but the yard retains a commercial use. It was at the end of the 18c. a canal was built joining the Severn Estuary at Bristol with the Thames and London. Now named the Kennet and Avon Canal it passed through Seend Parish and was an important transport facility until the event of the railway overtook it. The canal and towpath were used at times by the mining operations, but were not integral to that activity. It is now a significant feature in our Parish, having adapted its original transport role, to a recreational one.

In the vicinity, there were two local brickworks, one in Seend  Cleeve between The Barge and The Brewery Inns which closed  about 1850, and Sainsbury's brickworks at Sells Green (later the Devizes Brick and Pottery Company) that closed in 1915. It would have been from these brickworks that building material for the many local homes were built. The Millennium Window, 2000 (pictured opposite), in the Church of the Holy Cross, Seend is a delightful graphic description of the above narrative. It shows the significance of water in the story of the Parish’s various enterprises, with the flow crossing the bottom of all three panels. On the left the smelting towers, the railway and the canal are all depicted. The central panel gives significance to the church, and then the farming activities of sheep and cattle rearing as well as arable farming. The third panel shows images associated with the wool trade.  It was designed by Andrew Taylor, Little Panell, Devizes. 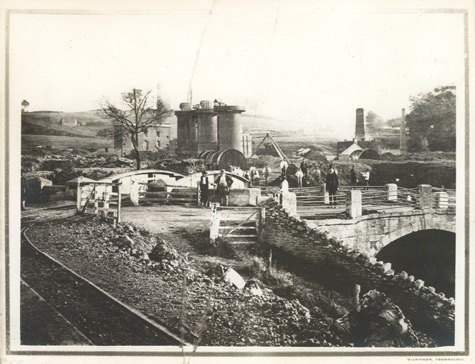